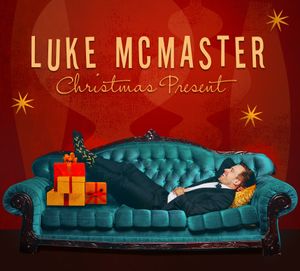 “Would it still be Christmas if we couldn’t be together?” McMaster sings in the album’s title track, expressing gratitude for the gift of cherished time spent with loved ones. It’s a sentiment many are feeling deeply these days, and McMaster gives everyone room to reflect as well as reason to celebrate.

On songs ranging from “This Christmas” and “Let It Snow” to “Silver Bells,” McMaster presents well-worn classics with a soulful spin. He delivers the hit “Wonderful Christmastime” in a laid-back fashion that invites listeners to kick back and lift a glass. Meanwhile, his upbeat “Christmas Must Be Tonight” sets a joyous tone for a tale of the very first Christmas. The album closes with McMaster’s stirring take on Stevie Wonder’s “Someday at Christmas” — a song that resonates deeply during a year that’s been a challenging one for many.

The upcoming album's lead singles, "Christmas Present" and "Christmas Must Be Tonight" are both available now on all digital streaming platforms.

McMaster, who kicked off his career as one half of the duo McMaster & James, went solo in 2002, shifting his focus to songwriting and collaborating with artists such as Rihanna, Nick Lachey, Nick Carter, and Kalan Porter. He recorded several EPs and albums, including Time in 2008, as well as 2013’s All Roads. The latter album featured the hit “Good Morning, Beautiful;” recorded with Grammy-nominated pianist Jim Brickman, the song peaked on the US Billboard AC Radio charts at #3. McMaster went on to release Heart of Soul in 2014 and 2016’s Trending.

Early in 2020, McMaster released Songs of Smokey, an homage to the soul legend who has been influential in his own career. Each of McMaster’s solo projects features his modern twist on the classic Motown sound. Set for release on Green Hill Productions, Christmas Present is no exception, delivering a lineup of songs that’s guaranteed to keep the holidays warm, lively, and bright.